Více
Ceny v:
PřihlášeníRegistrace
Domů - What Is Cinnamon Good For?

The Winsomeness of Cinnamon

Botanical name: Cinnamomum cassia The sweet, woody scent of cinnamon has been known from almost the beginning of time as one of the warmest, most soothing fragrances on the planet. Derived from the brown bark of cinnamon trees and native to Sri Lanka, it's been used for millennia as a spice, a medicine, and an extremely valuable trade commodity. Chinese botanical textbooks mentioned it as early as 2,700 B.C., and Biblical references are numerous.

There are two types: Ceylon cinnamon, produced in Sri Lanka, India, Madagascar, Brazil, and the Caribbean, and cassia cinnamon, coming mainly from China, Vietnam, and Indonesia.

Cinnamon usually comes in stick or ground powder form. Either way, the best way to preserve its freshness is to store it in a glass container in a cool, dark place (the refrigerator works).

Cinnamon is a popular ingredient in recipes and adds a slightly spicy flavor to numerous dishes. 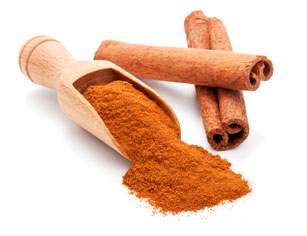 While you'd probably be more likely to eat half a teaspoon of cinnamon rather than an ounce in one sitting, the above profile serves as an estimate of the nutritional benefits derived from even the smaller amount. And that, of course, is a bonus to what we think of as the main benefit of this fragrant culinary spice.

Cinnamon provides high amounts of calcium and fiber. One teaspoon provides a whopping 22% of the daily recommended value in manganese.

What does manganese do for you? A lot, actually. Manganese is a trace mineral that helps the body form strong bones, connective tissues, and sex hormones, and coagulates the blood properly. It helps metabolize fat and carbohydrates, regulate blood sugar, absorb calcium, and is essential for optimal brain and nerve function. As if that's not enough, it’s also a component of the antioxidant enzyme superoxide dismutase, which helps neutralize free radicals that can damage cell membranes and DNA. Proper levels of manganese have been linked to the prevention of diabetes, arthritis, epilepsy, and even PMS.

Touching on a few more benefits, the oils in cinnamon give it three distinct health benefits: cinnamaldehyde, cinnamyl acetate, and cinnamyl alcohol. Platelets help blood coagulate to keep blood from flowing too freely when an injury occurs, but cinnamaldehyde helps prevent it from coagulating too much.

Another advantage is its antimicrobial activity. When researchers tested the effects of just a few drops of cinnamon oil on three ounces of refrigerated carrot broth, the growth of the foodborne pathogenic Bacillus cereus was inhibited for 60 days. But the B. cereus flourished in the same amount of carrot broth without the cinnamon, despite refrigeration. This antimicrobial effect was known to the ancient Egyptians, who used cinnamon in their mummification processes.

Just smelling cinnamon or chewing cinnamon gum is enough to boost brain activity, according to another study. In fact, test scores were higher, and memory, visual recognition, and motor speed were greatly enhanced in individuals who took a whiff of cinnamon, compared with individuals who smelled jasmine, peppermint, or no fragrance at all.

For more helpful information on cinnamon, see: Half a Teaspoon of This Each Day Can Optimize Cholesterol Levels... 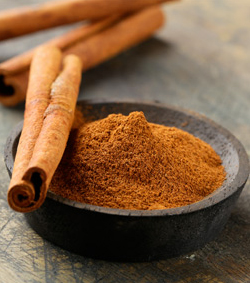 Grind the flax seeds in a coffee grinder. Add cinnamon.

*Use bananas and green apples that are not fully ripe and contain less sugar.

(From Healthy Recipes for Your Nutritional Type by Dr. Mercola)

Biblical references reveal that ancient merchants carried Asian cinnamon (cassia) all the way from Ceylon to Palestine – a 24-hour trip in today's world – even before the pyramids were built. The most ancient cinnamon source is traced to Sri Lanka, which in 1536 was invaded by the Portuguese, who demanded a tribute of 110,000 pounds of cinnamon per year from the Sinhalese king. When the Dutch captured Sri Lanka a century later, they instituted a cinnamon cultivation system still in use today.

Cinnamon is so much more than a fragrant spice. The Egyptians had it right when they used it for embalming the dead, and traditional uses in a number of cultures around the world discovered early that cinnamon could be a useful tonic for upset stomach, diarrhea, flatulence and menstrual cramps. Modern science has pinpointed numerous ways cinnamon can be used to reverse serious medical conditions, such as cancer and diabetes, and the studies are stepping up since it's been identified as a substance that has amazingly effective cognitive effects, lowers insulin levels, and has proved chemopreventive. Cinnamon's health benefits – one of them being 68% of the daily recommended value in manganese, for instance – are renowned throughout the world, and continue to show promise.